* It is loud and projects strongly – but it’s not as overbearing as the shower gel can be.  That’s not saying it’s weak or anything – it’s just not AS strong as it could be.

* Wait, I take that back.  After five minutes it gets stronger.  Okay, here comes the cotton candy attack with bubble gum and vanilla as supporting players.  Imagine floating in clouds of cotton candy .   It feels like you are enveloped in it.

* While it is quite linear, there is a bit of melon that wafts in from time to time.

* The sweetness stays present even when it dries down to a sweet vanilla musk and becomes a skin scent.

Summary:  I am a huge fan of Lush Snow Fairy Shower Gel, so when I hear they were releasing the pure perfume version, I ordered it the first day.  The perfume is faithful to the shower gel and will bring a smile to your face.  Spray some on and your spirit is instantly lifted.  With the strong projection and silage, this isn’t office-friendly and I couldn’t imagine wanting to smell like cotton candy in the office anyhow.  Longevity is really good – between 8 and 12 hours when I wear it.  Since the shower gel is colored pink, this is obviously aimed feminine, but it definitely smells great on the right guy as well.

Lush Scent Snow Fairy is a limited edition that was available only from their website. Check there first to see if it is still available. If not, ebay is pretty much your only option.

After a good night’s sleep, I met up with Abdul Al-Jofar (a friend from a Facebook group) to do some sniffing in Paris.  We were a little early for Hotel Costes and Jovoy, so we were walking around and bumped into the Francis Kurkdjian boutique. The lovely Anastacia from Ukraine showed us the Russian exclusive Ciel du Gum, which is similar to Absolue Pour le Soir but a bit more musky and less cutting.  We had a nice chat about how Francis listens to the different markets and tailors scents for them.  For example, Germans don’t like orange blossoms and the French don’t like Patchouli, while the US people love clean and fresh.  Yes, these are all generalities but they do hold true. The running joke was what kind of scents do Asians like: the ones you can’t smell.  She ran into the back and pulled out a tester of the Marie Antoinette scent that Francis was working on.  Based on a formula found in the family’s vault, he reconstructed it with natural ingredients to match what the original would smell like.  Sniffing it, the overwhelming green floral was narcotic. While it’s not a scent I would ever wear, the beauty was magnificent and I kept the card in an envelope so I could continue to enjoy it.  She also showed the new skincare line which is based on some of the more popular scents.  Both Abdul and I said that if they did a body wash of Absolue Pour le Soir, we would buy out the store.  Of course, why would you buy a body wash that makes you smell dirty?  Especially when you can get Flying Fox from Lush.

Next up was a trip to Hotel Costes where we had a nice chat with Ronald (see last year’s write-up about the perfume Nazi here). I asked about the rumor about some scents being brought back and the lineup changing for IUMX.  He confirmed that and went on to say a few more things (which I forgot), but watch for some new scents in the IUMX line to be forthcoming.  Abdul picked up a travel spray of one of the scents as a gift (he had already bought four others the night before). We both felt really special, because Ronald agreed to take a picture of us – in the store – in front of the sniff flowers.

Jovoy was right up the block, so we spent at least an hour sniffing everything in the store.  A quick sniff of the new Neela Vermiere made me thankful that I was going to meet her the next day for lunch (and to get a full sample). I asked for (and was graciously given) a sample of the forthcoming Puredistance Black which I sniffed and I found to be a well-done spicy incense, though I need to give it a full wearing. The new Von Eusersdorff Orange was a surprisingly long citrus, which lasted a long time on skin (citrus notes usually dissipate quickly on me).  New to me was the Arte Profumi line, from which I really liked Harem Soiree (a boozy patchouli) and Sucre Noir (an expensive-smelling vanilla).  From the house line (of which I own and wear Psychedelique and Private Blend),  I sample Lys Epona – a gorgeous lily/rose blend tempered with a musky tobacco.  Looking at the Roja Dove display, I tried the Diaghilev, which was entrancing.  It was like a more moneyed version of Puredistance M (which already smells expensive). Though at 990 Euros, it is also a scent that I would never even consider owning – though it’s definitely worth smelling.  Abdul was really into Vero Profumo, testing the new Vol Extrait concentrations before purchasing two of the Kiki versions (I had fun explaining to him what a Kiki really was). I really need to spend some more time playing with the Vero scents – on first sniff, they are all pretty amazing.

Abdul had to run off to join his family, so I went on to meet the lovely Hungarian perfumer Viktoria Minya for a coffee and an interview.  Just like yesterday’s chat with Pierre Guillaume, I found it refreshing how Viktoria speaks her mind, backs up her points, and is so passionate about her work.  Like Pierre, Viktoria is the chemist who makes her own scents.  She studied in Grasse and has her own lab outside Paris.  Her first self-released scent, Hedonist, is exceptional (read the eaumg review here) and she said she has more scents in the making.  I asked her if she would ever consider making a version of the scent that could be mass-marketed.  She said that with the level of raw ingredients she was using, she couldn’t keep the integrity of her product while reducing the price for the retail point of department stores. That balance is always an issue for every perfumer.  Watch for my interview with Minya to pop up on the site really soon.  Oh, by the way, Viktoria is every bit as enchantingly beautiful as her scent.

Relying on Google Maps, I found my way to Planet Rasoir to pick up some Martin de Candre pre shave for me (and Fougere soap for my friend Duane).  While there, I asked for a recommendation for a barber to get a shave and they graciously made an appointment for me at L’atelier Gentleman for the next day. 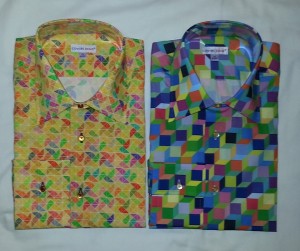 A quick visit to Coton Doux and I found two obnoxiously-colored geometric patterned shirts that would look good on stage (which I therefore bought).

Next up was the big department stores Printemps and Galleries Lafayettes.  Catching my eye at Printemps was the new 777 line from Stephane Humbetr Lucas (the creator/nose behind Nez a Nez and So Oud). I sniffed each one and Rose De Petra was a really nice sweet rose and Khol de Bahrein was a sweet, syrupy leather. The jewel of the line was O Hira – sweet honey, syrup, balsams, and resins – basically the nectar of the Gods.  I fell for it and it smelled great on me.  If it wasn’t for the price at 580 Euros, I probably would have bought it. Instead, at Printemps, I found an amazing mosaic-tiled abstract shirt from Miharayasuhiro that was constructed like nothing I had ever seen before. It took me a while to figure it out and anything that enchanting has to come home with me.

My final stop of the night was Sens Unique in the Marais – another amazing independent niche boutique which carries the Pierre Guillaume lines as well as Laboratorio Olfativo, Jacques Zoltu, Shiloh Hors La Monde, Jul et Mad, Au Pays La Fleur Doange, Maria Lux, Oliver Durbano, and Humeicki and Graef.  After sniffing just about the whole store, I settled on a few to test- Figue Fruitee, Tuberose Rosee, and Lavande Ombre (from Au Pays La Fleur D’ranger), Jul et Mad Amour de Palazzo, and Purple Amethyst & Philsophical Stone from Oliver Durbano.  I saw something on the back shelf that I hadn’t seen before – it was two oil-based scents from Nabucco – Amytis and Nabucco.  Both were enchanting, and I had a drop of each put on the top of my hand.  The longevity of both were insane – lasting through several hand washes and a shower.  Amytis is a sumptuous, honeyed vanilla that becomes a sweet, nutty amber vanilla over its wear.  Again, it’s amazing but also insanely expensive.

Sens Unique closes at 9pm which made it the perfect final stop of the evening.  The metro on the way home had me chuckling at advertisements and the seat cushions (wondering if Paul Smith had designed them).  Back at the hotel, I passed out asleep as soon as I sat down on the bed.

* Karma starts with a brash and intense blend of orange, bergamot, and pine.

* One or two sprays is enough- any more and Karma transforms from strong fragrance to industrial cleaner smell.

END_OF_DOCUMENT_TOKEN_TO_BE_REPLACED

* It’s called dirty but its actually clean.  It starts with a refreshing burst of spearmint and herbs (tarragon and thyme).

* Projection is strong for the first hour or so.  People around you will be smelling herb garden.

* Sometimes I get lavender or licorice in there, sometimes I don’t.

* You can tell this is marketed to guys since it comes as a ‘body spray in a Windex-looking bottle.’  The body spray is a little more minty and sheer with less emphasis on the herbs.

* The EDP (not body spray) is pretty linear and calms down after about an hour. The spearmint and herbs quiet down a little bit and are joined by sandal wood in the base.

* “Dirty” is said to be a reference to the “Italian Shower” – jumping out of bed wearing the same clothes and just spraying cologne to cover body smell.  I guess this scent would work for that situation.

Summary:  I find myself becoming more and more of a Lush fanboy.  Their products and scents are great quality, have solid longevity, and are priced fairly. You get great value for your money in a Lush store.  I love Dirty and would recommend trying the associated products – especially the springwash and the toothy tabs.  The springwash will wake you in the morning with a tingling mint.  It reminds me of CO Bigelow Menthe.  The toothy tabs will be covered a future review, but are basically baking soda tablets that you crush up and use as toothpaste.  I can’t vouch for the hair cream (for obvious reasons) and i wasn’t a big fan of the shaving cream.

Guys, check out Dirty for a fun and refreshing summer fragrance.  If you spray this on at least an hour before you get to work, it would be office-friendly.  If you spray it on in your car before you walk into the office, your coworkers will look at you strangely.  Victoria at eaumg.net recommended using the Dirty body Spray as room spray – and at 19.95 for 6oz, I would agree it does work for a multipurpose product.  Her Frug named Frink seemed to like it even more.  If you are planning to use Dirty as solely a skin scent, go for the longer lasting EDP.

Lush Dirty is available at Lush stores and on the Lush website.

*Disclaimer – No disclaimer needed – I bought a full bottle.